4WD Camping in the Ford Everest 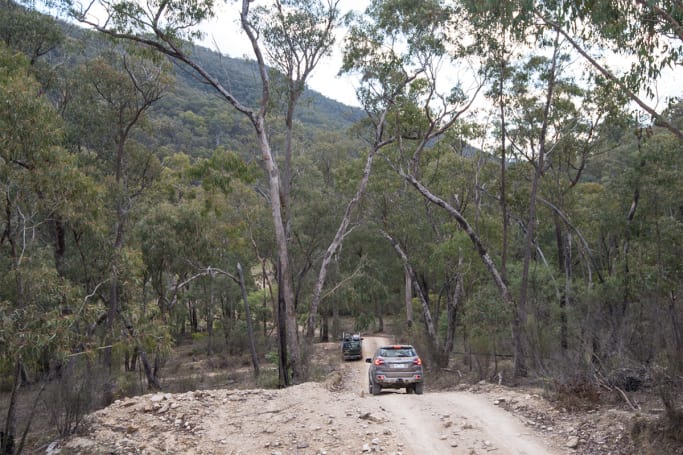 We clocked up about four hours of driving to reach the start-point proper of this two-day adventure; it’s about 195km to Goulburn, then a further 92km to Canberra and then a 58km run to Brindabella NP. But you won’t catch us whinging because a bit of drive time is almost always the case if you want to get off the beaten track: you first have to get a fair few kms under you, on bitumen, before you reach the good dirty stuff.

Anyway, you turn right off the dirt-and-gravel stretch of Brindabella Road into Gentle Annie Trail – clearly signposted as “Four Wheel Drive Only” – and it really is quite a gentle track, especially compared with what you later face on this trip.

This is really a gentle track, especially compared with what you later face on this trip.

According to the NSW National Parks and Wildlife Service (NPWS), Brindabella NP lies within the tribal boundaries of the Ngunawal, Wolgalu and Wiradjuri people and the region holds spiritual significance to Aboriginal people.

The first part of our trip was only 4km or so along a twisting track through the bush – surrounded by mountainous terrain thick with gum trees and red stringybark – to Flea Creek campground, which was a brief stop. It’s a top spot and ideal for a picnic or to stay the night; it’s free tent-only camping with barbecue and toilet facilities.

The first part of our trip was only 4km or so along a twisting track through the bush.

But we weren’t staying the night there; we were pushing on, deeper into the bush.

We took a stack of photos and had a quick sip of water before we were on our way again.

Our destination for that night’s camping was McIntyres campground, a little under 20km north and then north-west from Flea Creek.

Our destination for that night’s camping was McIntyres campground, a little under 20km north and then north-west from Flea Creek.

Initial sections of Webbs Ridge Trail were gently sloping and winding but the track soon revealed steeper inclines and declines and became a lot more challenging: slippery clay, scuffed rocks and deep ruts with sharply-angled exit points at the crest of some hills. There’s no mistaking the fact that this was 4WD only territory – and it’s signposted as such at various points by NPWS: “Steep Trail Ahead, High Clearance 4WDs Only, Engage Low Range, Slippery In Wet Conditions, Trailers Not Recommended”.

The clay tracks here, when dry, make for an interesting drive.

The clay tracks here, when dry, make for an interesting drive but, bear in mind, that if there is rain those low-traction surfaces can swiftly become more treacherous; track shoulders along the route are often crumbly and loose, even when dry, and the drop-offs to the side of the track in places are quite sheer and unforgiving. So avoid this drive if there’s been recent rain or if rain is forecast.

Having said that, the 2019 Ford Everest Titanium 2.0-litre bi-turbo I was in handled everything with ease – with judicious use of the terrain management system, hill descent control, and the rear diff lock on one particular climb. I would, however, replace the standard road-biased 20-inch rubber (Goodyear EfficientGrip SUV) and wheels with, for starters at least, the 18-inch off-road tyre-and-wheel combination, which Ford offers as a no-cost option on the Titanium.

The 2019 Ford Everest Titanium handled everything with ease.

The Brindabella scenery was dramatic at every turn, simply beautiful, with sweeping views over the Brindabella Range from our vantage point on the ridgeline. Our drive down to McIntyres campground was the day’s final steep thrill-ride into the campsite proper.

McIntyres, an expansive campsite among the eucalypts on the banks of the Goodradigbee River, is so named because of the original Alpine hut built here by Les McIntyre in 1948 as a fishing hut. Destroyed by fire in the late 90s, the hut was rebuilt by 4WDers. It is a bit rundown nowadays but nonetheless remains a fitting testament to the hard work and dedication of a bunch of people who love the bush. The hut has four bunk beds, so if the weather turns bad, there is always the option of staying here if needed.

Our destination for that night’s camping was McIntyres campground.

Otherwise, facilities at McIntyres campground are minimal: drinking water is not provided here so bring plenty of your own, sites are unmarked and unpowered, and there are no bins so take out all of your own rubbish. There is, however, a well-maintained long-drop toilet, it is free to camp here and booking is not required.

Overnight, temps nudged about 0 degrees celsius when we were there (early September) and maxed out around 11 during the day.

The air was fresh and mountain crisp and we savored it.

As far as wildlife goes, I’ve seen kangaroos and wallabies here before on the river flats but not on this trip. NPWS reckons the region’s alpine and sub-alpine environment is home to more than 80 species of birds – I spied a few black cockatoos and a big bird of prey that may have been a peregrine falcon – and many other native animals, including threatened mammals such as the spotted-tailed quoll and the yellow-bellied glider.

The air was fresh and mountain crisp and we all savored it as we gathered fire wood, got the fire going and, later, had a few quiet beers around its welcome warmth.

We backtracked all the way to our start-point but the track took on a decidedly different character, when it came time to drive it in the opposite direction.

Basically, we backtracked all the way to our start-point but the track took on a decidedly different personality, a different character, when it came time to drive it in the opposite direction; yesterday’s steep drop into the campground was now a decent climb out of the area. The cool of the morning had made the track slightly damp and slippery; the sky was rain-dark in patches so we wanted to get out of the area rather swiftly to avoid any difficulties brought about by wet weather.

We wanted to get out of the area rather swiftly to avoid any difficulties brought about by wet weather.

As we headed back along the route we saw the turn-off to Lowells Flat Campground on our right, but even though it’s another great tent-only unpowered camp with toilet facilities, we pushed on.
We wound our way back along the track, passing through Flea Creek campground, and then to the entry point on Brindabella Road – from there it was back to civilisation.

Brindabella NP is a very appealing destination for 4WDers.

Brindabella NP is a very appealing destination for 4WDers, mountain-bikers, bushwalkers and bird spotters. It doesn’t take ages to get there and it offers real insight into what high-country 4WDing and camping is like. All in all, it makes for a top break with plenty of great driving through incredible bushland.