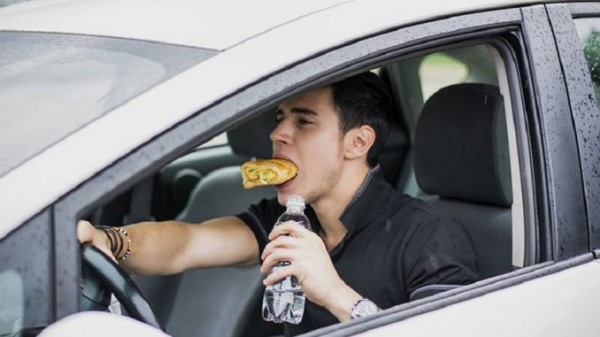 The phrase “dangerous driving” typically brings to mind images of drinking, swerving and speeding behind the wheel.

However, activities that people don’t usually classify as dangerous – things such as eating or reaching into the back seat – are actually some of the most common habits of Australian drivers, and some of the most dangerous.

In fact, internal distractions are one of the biggest causes of crashes and incidents on the road in Australia, but people don’t really think about this while driving.

A recent study surveyed over 1,800 Australian drivers and found that an enormous 70% admitted to some kind of reckless behaviour behind the wheel.

It might seem a little mundane, but eating takeaway food while driving is actually a dangerous habit that nearly half (47%) of drivers admitted to doing.

Perhaps a little more confronting, 28% of drivers admitted to sending texts while on the road and 27% said that they had picked up the phone to answer a call while driving.

It wasn’t long ago that drivers were caught and reported by police for watching movies and TV shows behind the wheel.

In fact, 2% of those surveyed admitted to watching movies while driving and 3% said that they’d read the newspaper or a book.

Interestingly, there have also been findings that one in seven drivers (14%) are happy to steer with their knees, while 9% admitted to actually having a microsleep behind the wheel.

Other participants submitted their own dangerous activities including shaving, killing spiders and challenging themselves to drive with their eyes closed for as long as possible.

Worryingly, parents who have young children (under the age of 10) were found to be over four times more likely to text and drive than parents with adult children.

These results bring to light a call for more safety on the road. Roads & Maritime NSW has reported that distractions are the cause of around 14% of road accidents and one-third of these distractions take place within the vehicle.

It’s also important to note that comprehensive car insurance policies will in most cases not provide cover for an accident or damage that has occurred as the result of negligence or reckless driving.

This includes illegal behaviour such as texting or answering a phone call behind the wheel.

The top 10 most dangerous activities that Australian drivers are doing behind the wheel: